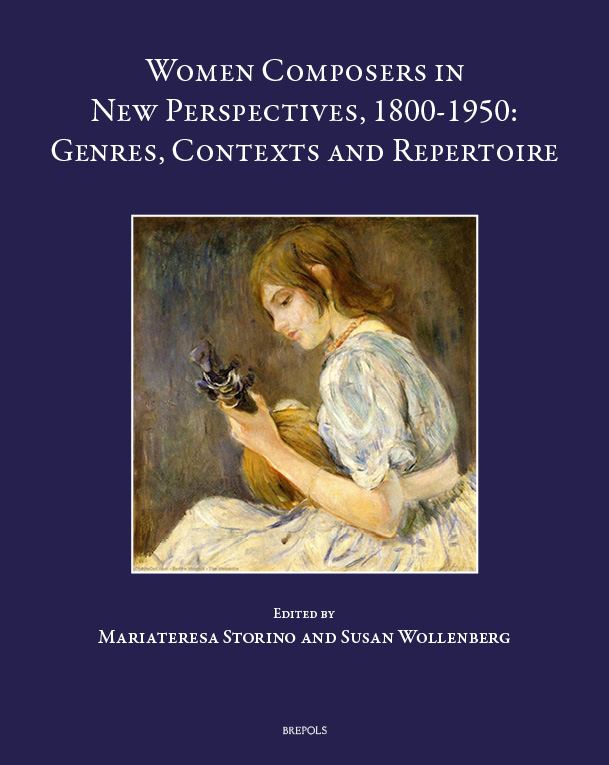 This volume offers new scholarship on women composers of the past two centuries, covering a wide range of repertoire, institutions and locations, with chapters focusing on such varied topics as women writing opera in early nineteenth-century Paris; the intertextual relationship between works by Fanny Hensel and Felix Mendelssohn; women composers writing for instruments not usually associated with them in their time – specifically horn, and organ; and the subversive musical activity of female prisoners in Spain under the Franco regime.

In two introductory chapters the editors present their broad perspective on women composers both in history and in modern scholarship, with particular reference to socio-historical and pedagogical aspects, and arguing the case for continued efforts to promote women’s music.

The 14 chapters that follow are arranged in two parts, divided between nineteenth- and twentieth-century topics. Their authors draw on a variety of sources, including archival documents, letters, diaries, and memoirs, to illuminate the musical works produced by women during the period and the contexts in which they were written, performed, and disseminated.

Collectively the chapters demonstrate the richness inherent in this area of study; in reflecting some of the directions being explored in current scholarship, they provide impetus for further research.

Mariateresa Storino is Professor of Music History at the Conservatoire of Music ‘G. Rossini’ (Pesaro) and collaborated until 2021 with the ‘Fondazione Istituto Liszt’ (Bologna). After receiving her Ph.D. in Science of Music at the University of Trento, she held post-doctoral research fellowships and was awarded with musicological prizes. She has published books and essays on Franz Liszt’s life and music, and on topics including the symphonic poem and women musicians (in particular Augusta Holmès and Jessie Laussot Hillebrand). She prepared the first editions of Liszt’s scores Jeanne d’Arc au bucher (2021) and Concerto sans orchestra (2006), and edited the book Franz Liszt and Jessie Taylor Laussot Hillebrand: un capitolo inedito della storia musicale del secondo Ottocento (2016). In 2017 she participated as co-curator in organizing the exhibition “Italy through the eyes of Franz Liszt” for the Liszt Museum in Budapest (11 May 2017 – 8 May 2018). Her last monograph Liszt a Pisa. Alle radici del recital pianistico tra suggestioni pittoriche e letterarie (2018) was accomplished thanks to a grant from the University of Pisa. She has taken part in national and international conferences, and has published numerous articles in academic journals and contributed chapters to various volumes.

Susan Wollenberg was until October 2016 Professor of Music at the University of Oxford, College Lecturer at Brasenose, and Fellow of Lady Margaret Hall (where she is now Emeritus Fellow). She has published widely on topics including keyboard music, the music of Schubert, social history of music in Britain, and women composers. She co-edited, with Simon McVeigh, Concert Life in Eighteenth-Century Britain (2004), and with Therese Ellsworth, The Piano in Nineteenth-Century British Culture (2007). She edited the proceedings of the Fanny Hensel bicentenary conference (Oxford, July 2005) for Nineteenth-Century Music Review 4/2 (also 2007) and convened the symposium ‘Ethel Smyth and her generation’ (Oxford, 2008) partnered with the Ethel Smyth Symposium, Detmold. Her monograph, Schubert’s Fingerprints: Studies in the Instrumental Works, was published in 2011. With Aisling Kenny she co-edited Women and the Nineteenth-Century Lied (2015). With Joe Davies and Laura Tunbridge she organized the Clara Schumann bicentenary conference held in Oxford (2019). She contributed chapters to various volumes published in 2021, including The Cambridge Companion to Schubert’s Winterreise, ed. Lisa Feurzeig and Marjorie Hirsch; The Songs of Fanny Hensel, ed. Stephen Rodgers; and Clara Schumann Studies, ed. Joe Davies; and to The Routledge Handbook of Women’s Work in Music, ed. Rhiannon Mathias (2022). She is currently co-editing, with Matthew Head, the Cambridge Companion to Women Composers.

Musical Improvisation in the Baroque Era