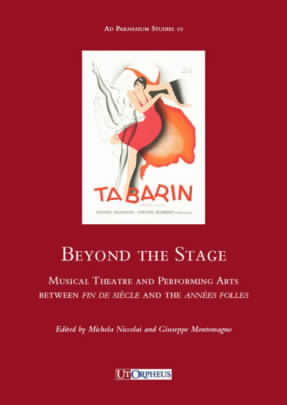 Musical Theatre and Performing Arts between ‘fin de siècle’ and the ‘années folles’.

The crisis of dramaturgical systems in the age of European modernism, between the end of the nineteenth century and the First World War, provoked the creation of a range of original artistic solutions until the 1930s which broke apart traditional musical genres. The quest for new forms of expression thus becomes a defining feature in modernist art. Composers, riding the wave of momentum built first in literature and the fine arts, blurred the boundaries between high and low styles, and it is in this co-existence, inherent to the new forms, that musical production found new life.

Theatre studies have pinpointed this desire for artistic experimentation with Paris at its centre, the city of light, that cultural meeting ground and formidable catalyst of artistic trends. The visual spectacle produced during the forty years (approximately 1890-1930) covered in this volume has therefore been analysed in a number of different ways, deriving from the vast panorama of cultural history, interrogating theatrical materials not only from the standpoint of the «spectacular», but also by investigating the links between high and low, mediatised culture. Musicological research applied to high art genres (song, opera, all genres of instrumental music) does not yet seem to have taken these hybrid spectacles which modify forms and genres in search of new musical and dramatic solutions into consideration, except in a few rare cases.

On the other hand, new impetus has been given by a renewed interest in popular chanson and ballet. In this current volume, we have chosen to interrogate the spectacular element, that is to say the performance, as ‘a text’, equal in status to the music and the literary text. Therefore, the different subject areas proposed in the following chapters reveal a lesser importance of the subject material set to music by composers but a greater willingness, at the centre of this aesthetic renewal, to try out new musical forms or to adapt traditional structures to new dramatic ends.