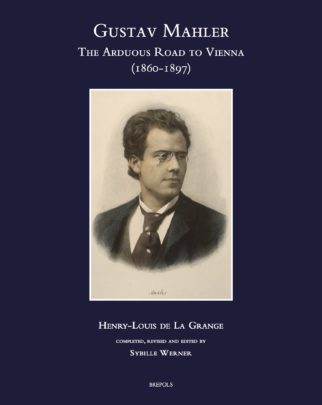 This long awaited revised volume I completes Henry-Louis de La Grange’s four-volume English language biography of the Austrian composer Gustav Mahler (1860–1911), which is widely considered to be the definitive work on the subject.

The present instalment, covering the years 1860 to 1897, traces the life and career of Mahler from his birth in a small village in Bohemia to his appointment to the Vienna Hofoper, then the most prestigious opera house in the world. It describes his family background, his student days at the Vienna Conservatory, his private life, and his burgeoning career as both conductor and composer.

Starting at a small summer theatre in Bad Hall, his first engagements took him to Laibach (Ljubljana), Olmütz (Olomouc), Kassel, Prague, and Leipzig, before he was appointed to principal posts at the important opera houses of Budapest (1888) and Hamburg (18

By now Mahler had also begun to establish himself as a composer. Some of his major works – starting with Das Klagende Lied (1881) – the early Wunderhornsongs, Lieder eines fahrenden Gesellen, and the first three symphonies date from this period of his life. While regularly rejected by contemporary critics, today they are favourites of the concert repertoire.

Go to top
Widely recognised as Gustav Mahler’s pre-eminent biographer, Henry-Louis de La Grange (1924-2017) — author of the 4-volume, 4,500-page definitive study of the composer’s life and work — was awarded a professorship by the government of Austria and an honorary Doctorate from the Juilliard School of Music. He lectured extensively, organised concerts, exhibitions, and music festivals, and contributed to film documentaries and radio features. Together with Maurice Fleuret he founded the Médiathèque Musicale Mahler in Paris.
German musicologist and conductor Sybille Werner started working with Henry-Louis de La Grange in 2003. She has repeatedly lectured and published on the performance history of Mahler’s works, and in 2018 received the Mahler Award of the Sociedad Mahler Mexico. At present she is associated with the Mahler Foundation and the Gustav Mahler Music Weeks, Toblach. Formerly based in New York, her conducting activities have taken her beyond the USA to Germany, Italy, Japan, Mexico. Poland, Serbia, and the UK.

John Williams. Music for Films, Television, and the Concert Stage