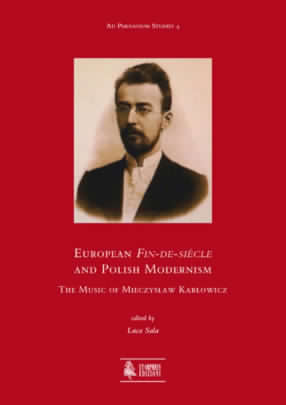 In this volume I aim to examine the figure of Mieczysław Karłowicz in the broader sociocultural context which fostered his work. The attempt to contextualize an immense intellectual patrimony — despite being restricted to a tiny number of works when compared to more prolific authors, especially in the context of the xix and the xx centuries — is always a complex and hazardous task.

My primary intention in organizing the volume has been to explicate Karłowicz the man as well as Karłowicz the composer, against the complex background of the European fin-de-siècle. The various essays aim to present the reader with an exhaustive reconstruction of Karłowicz’s intellectual work. Karłowicz’s oeuvre offers a broad artistic portrayal of Poland at the end of the nineteenth century as a fast-evolving country, politically divided and filled with contradictions.

Hence the necessity to investigate the fin-de-siècle context with its social and historical implications, showing the influence of the European cultural milieu on the composer’s poetics and on his thought. We shall examine the spectrum of relationships and affinities linking Karłowicz’s works to the Polish cultural world (on the wave of the rising ‘autochthonous’ avant-garde movements) and to the wider cultural life pulsating beyond its borders, with special reference to German Wagnerism and Symphonism. Essentially, we are striving to define the uniqueness of his oeuvre, which — in relation to the manifold influences co-existing in Poland, an insubstantial nation from the political viewpoint and divided along three socio-cultural fronts — could be defined as distinctively Polish, yet ultimately European. (Luca Lévi Sala)