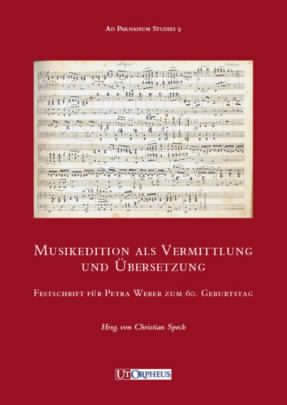 Musical composition is always related to the work’s realisation in sound. A written form is required in order to give shape to the compositional intention. Consequently it is text, the musical text, which mediates between the act of composition and the performance. The object of the musical edition is to prepare the text so that the will of the composer is presented to the musicians in a way that allows the composition to become realised musically.

The edition thus inevitably establishes a conflict between divergent orientations, such as between science and practice, preservation and actualization, as well as textual criticism and hermeneutics. Because his editorial decisions are fundamentally interpretive the editor must know and understand the historical and hermeneutical problems of his subject, especially when it comes to determining what stage of the work is to be presented. The editing of music is not always restricted to mediation; it may also represent a translation.