Home In press Concerto in A major Op-sn 3 for Violin, String and Continuo 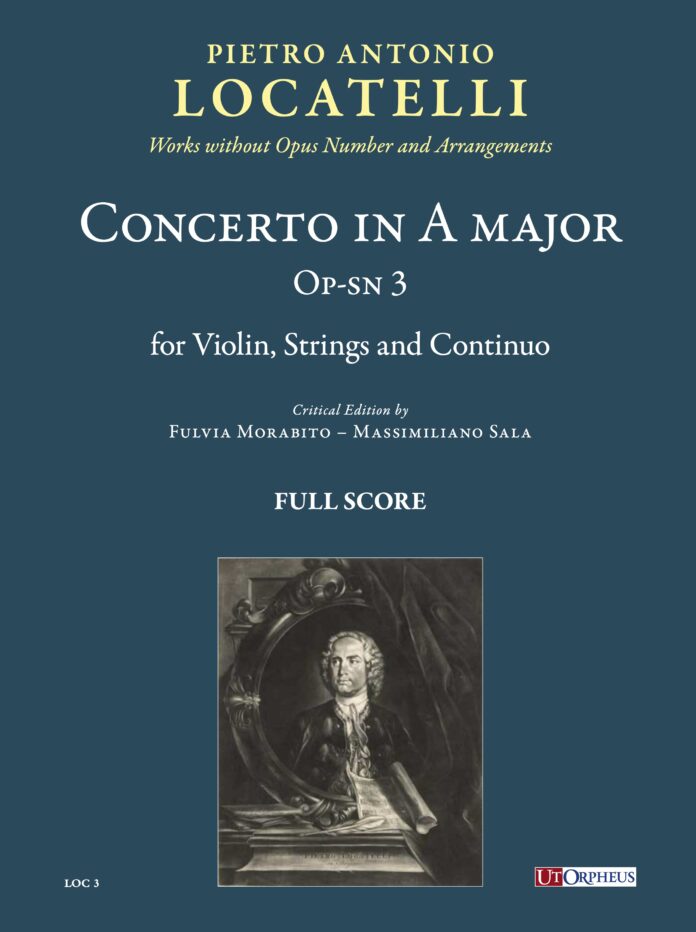 The Concerto in A major by Pietro Antonio Locatelli (Bergamo, 1695 – Amsterdam, 1764) is a work that is not among the authenticated compositions of the Bergamasque violinist and composer.

It is not therefore included among the eight opus numbers known to date that were printed in Amsterdam under the author’s supervision; nor is it mentioned in any of the catalogues compiled by Locatelli himself. It is therefore a work attributed on the basis of documentary and stylistic considerations.

The musical text is derived from two manuscript sources that concordantly and explicitly attest its Locatellian authorship.

Structurally, the Concerto is divided into three movements as follows: Vivace – Largo – Allegro. Stylistically, Dunning judges the Concerto in A to be in line with Locatelli’s methodology, and, in support of the authenticity of the piece, he points to a «reworking of the opening bars of the central Movement of the Concerto» in comparison with the analogous ones in the Largo (bb. 1-11) of Concerto Op. iii No. 12.

The phenomenon of self-quotation, which is unequivocally present in Locatelli’s work, is less evident here, and, in addition, the attributive value of the ‘linguistic’ formulas can be reduced in significance to ones common to most contemporary Baroque music.

Also in terms of authenticity, the presence of a short Capriccio at the end of the concluding movement is significant, if not probative, in reflecting the form of the outer movements of the twelve Concertos Op. iii, L’Arte del Violino.

Following the Capriccio is a very short, written Cadenza: this is in contrast to the Solo Violin Concertos of Opus iii and the Capriccio from Violin Sonata Op. vi No. 12, where the Cadenza is prescribed but not notated, since it is left to the performer’s inventiveness.