Home In press Concerto in E major Op-sn 4 for Violin, String and Continuo 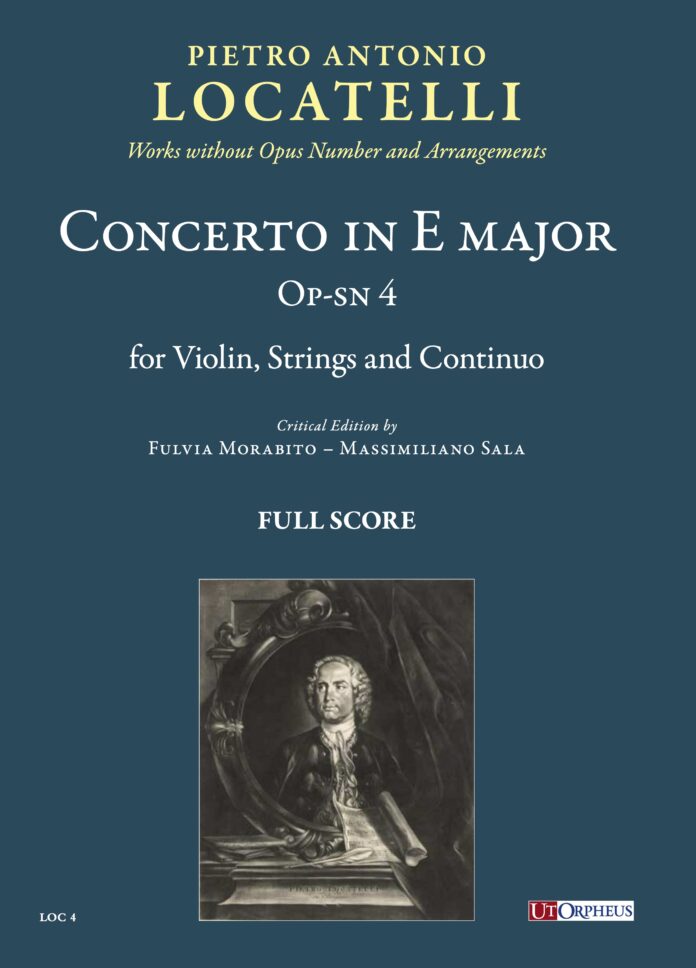 The Concerto in E major by Pietro Antonio Locatelli (Bergamo, 1695 – Amsterdam, 1764) is a work that is not among the authenticated compositions of the Bergamasque violinist and composer.

It is not therefore included among the eight opus numbers known to date that were printed in Amsterdam under the author’s supervision; nor is it mentioned in any of the catalogues compiled by Locatelli himself. It is therefore a work attributed on the basis of documentary and stylistic considerations by the scholar Albert Dunning.

The musical text is derived from a single manuscript source preserved in Dresden, at the Sächsische Landesbibliothek, with the shelfmark Ms. 2458-O-2.

Cross-referencing the available documentary evidence, as reported above, Albert Dunning attributed the Concerto in E major to Locatelli, listing it among the authentic works with the catalogue number Compositions without Opus Number 4.

Structurally, the Concerto is divided into three movements: Andante – Largo – Andante. Stylistically, Dunning judges the Concerto in E to be in line with Locatelli’s methodology, and, in further support of the authenticity of the piece, he points to an affinity between bars 131-140 of the third movement of the Concerto in E and bars 59-66 of the Largo of Locatelli’s Concerto Op. 3 No 9.

Such a small number of bars does not undoubtedly support the phenomenon of self-quotation, which is otherwise commonly evident in Locatelli’s work. One is therefore more inclined to downplay the attributive value of the passage by more prudently attributing the similarities to ‘linguistic’ formulas common to all contemporary Baroque music.