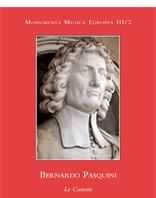 This critical edition collects Bernardo Pasquini’s sixty-plus unpublished cantatas. It not only enriches the field of studies on Roman vocal music during the last quarter of the 17th century, but also enhances our knowledge of this versatile composer. Although today Pasquini’s name is still primarily associated with his keyboard works and his fame as a virtuoso, we must not forget that a substantial part of his output was devoted to vocal music.

As was then customary, most of his cantatas are chamber works, for one voice only, and secular in content. To these, however, we must add the large festive cantatas, composed for important celebrations and scored for various voices and instruments, and the spiritual cantatas, which can be likened to small oratorios. Given that this repertory was transmitted exclusively in manuscripts (though in no case autograph manuscripts), a study has been carried out on the late-17th-century Roman and Modenese copyists responsible for the surviving sources.

Careful examination of the poetic texts, all anonymous, has also led to the identification of the authors of a very small number of the works: they include Cardinal Benedetto Pamphili, Francesco Maria Paglia and Alessandro Guidi. Finally, recent archival research has brought to light new information on the composer’s life.