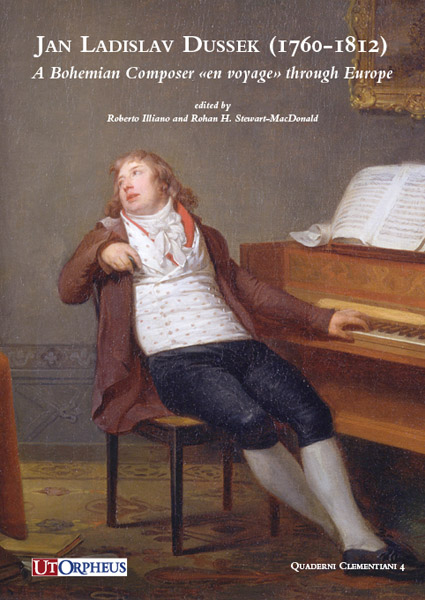 The career of Jan Ladislav Dussek (1760-1812) was notable for its peripateticism. Starting out in his native Bohemia Dussek spent periods of time in Germany and the Netherlands, settling in London for about ten years in the 1790s, progressing to Hamburg and ending his days in Paris. Although his activities centred on the piano, like so many musicians of his day Dussek branched out from performing and composing to encompass teaching, publishing and instrument retail, with varying success.

A plethora of reviews and biographical accounts attest to Dussek’s renown throughout Europe as a pianist and composer, particularly when it came to sensitive and cantabile playing; and he interacted with some of the most eminent musicians, artists and political figures of his time.

Dussek’s reputation declined sharply in the nineteenth century, however, and with the exception of isolated revivals of his work, for instance in London in the mid-nineteenth century, he has remained on the verge of obscurity in the minds of many musicians and music-lovers until the present day: even his well-known innovation of placing the piano sideways-on to the audience to display his striking profile is often mistakenly attributed to Franz Liszt.

Although Dussek has provided the subject of a number of student dissertations over the years, in the published literature he has largely been restricted to cameo appearances or brief entries in historical surveys.

The bicentennial anniversary of Dussek’s death provides a fitting occasion for bringing together scholars from all parts of the world to produce the first multi-author, multi-lingual study of the composer. Several chapters deal with aspects of Dussek’s biography and iconography that receive only sparse treatment elsewhere; others survey the different branches of his output, including the piano sonatas, the piano concertos, the chamber music with and without harp and the three String Quartets, Op. 60, which are currently enjoying a revival via recordings and a new edition.

This book has two fundamental aims. One is to stimulate renewed interest in, and debate about, a less than celebrated – one might say unjustly neglected – figure. The other aim is to approach Dussek’s multi-facetted, geographically diverse career as an interface between ourselves and the music business at the beginning of the nineteenth century, whose complexity and vicissitudes emanated from the sociological dynamics and political events with which Dussek was, to an almost unique degree, inextricably associated.

The highs and lows of Dussek’s career, the surviving contemporary accounts of Dussek the performer and composer, and the letters he exchanged with colleagues in several nations vividly portray the struggles of a worldly, ambitious, versatile and extremely perspicacious musician striving to carve out a place of eminence and material security for himself. This meant negotiating the complex progression, underway at this point in history, from the patronage system to the emergence of the artist as a socially and financially autonomous entity.